The weird worlds of the outer solar system have been continuously surprising: Europa’s ocean, Io’s volcanoes, Triton’s cantaloupe terrain, Miranda’s cliffs, and Enceladus’s plume. Many of the small worlds are characterized by water-icy outer shells, and in many cases, liquid water oceans in their subsurfaces. Most are much smaller than Earth and harbor enough heat to be active today. We will tour many of these wacky places and discuss why we think they might look and behave so strangely.

Emily is a Research Physical Scientist in the Center for Earth and Planetary Studies at the National Air and Space Museum. She has spent much of her career reconstructing Enceladus’s early tectonic history to provide insight into how Enceladus developed into one a geologically active world. Enceladus is one of Saturn’s moons with an epic hot spot in it’s south pole spewing water into space, creating one of Saturn’s rings. Emily uses her research to better understand places like Enceladus where there are likely to be oceans under their icy shells, which could be great environments for microbial life to live. Emily’s research interests are in planetary surface processes and tectonic deformation of icy bodies of the outer solar system. Emily has most recently been working on our Moon, closely studying the formation of faults around the dark Mare on the near side to better understand how they formed.

Emily received her BA in physics from Wheaton College (MA) where she first began exploring the icy satellites. She subsequently obtained her MS form Northwestern University in earth and planetary science and her PhD in geological sciences form the University of Idaho.

Night Sky Photography with Your Smartphone

Did you know your smart phone is able to capture amazing night sky scenes? Dan Ward will cover the basics of using your phone to take beautiful snapshots of astronomical wonders such as the Milky Way, the Moon, and Planets. Using simple techniques, we can capture beautiful night sky images. Weather permitting, you may be able to photograph the Moon or Jupiter tonight! The presentation will also show how some people are using more sophisticated techniques to capture smart phone images rivaling what major observatories were barely able to do only a few decades ago.

Dan Ward joined NOVAC when he moved to Virginia in 2003 but began his star gazing adventures over 50 years ago. His first telescope was a 3” Gilbert reflector Christmas present during the Sputnik era. His lifelong passion for astronomy has been nurtured via participation in astronomy clubs and events in Texas, North Carolina, Connecticut, Illinois, Arizona, and Virginia. Dan has been a regular astronomy topic speaker for area camera clubs, astronomy groups and local parks. Warned by his wife not “add any more items to the optical density of the Ward household,” Dan is painfully purging his telescope collection down to a dozen or so most beloved telescopes and binoculars.

Discovering planets around the nearest and brightest stars with the Transiting Exoplanet Survey Satellite.

The previous decade has seen a dramatic increase our understanding of the frequency and diversity of planets orbiting other stars. NASA’s Kepler exoplanet-hunting space telescope taught us that the Milky Way galaxy is teeming with tens of billions of exoplanets. NASA’s Transiting Exoplanet Survey Satellite (TESS) continues on this journey of exoplanet discovery. TESS began a nearly all-sky survey to discover exoplanets orbiting bright nearby stars in mid-2018, and has already announced exciting early results. The primary science goal of the mission is to detect transiting exoplanets that can be characterized by larger ground and space-based telescopes. TESS will provide a plethora of targets that we can use to study how planets form, what they are made of and whether they have atmospheres. In 2021 we can look forward to the powerful infrared James Webb Space Telescope, which will target TESS discoveries for atmospheric characterization. With Webb we can search for water, carbon dioxide, and other chemicals in exoplanet atmospheres.

Dr. Tom Barclay’s career is focused on space-based time-domain astronomy. He currently works as a Research Scientist at NASA’s Goddard Space Flight Center. He led teams that discovered the smallest known exoplanet and with colleagues discovered the first Earth-sized planet in the habitable zone of another star.  After obtaining his Ph.D. from University College London, he moved to NASA’s Ames Research Center in Silicon Valley, California to work as a support scientist on the Kepler Mission. His primary focus has been maximizing the science yield of the mission through supporting the science community. He was part of the science leadership of the K2 Mission, Kepler’s follow-on, where he led the mission’s Guest Observer Program and was awarded NASA’s Exceptional Public Service Medal. In 2017 he moved to NASA’s Goddard Space Flight Center to work on the Transiting Exoplanet Survey Satellite where he leads the Guest Investigator Program and is the mission Associate Project Scientist. His research is focused on detecting and characterizing exoplanets. 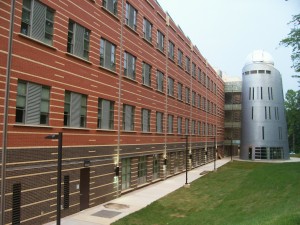