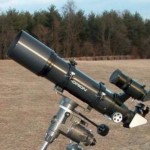 This low-cost Chinese-made refractor has only been on the market nine months, but already it appears Orion’s new 80mm ED f/7.5 scope is a huge hit. Indeed, the Orion ED users yahoo group has grown from some 30 members in October 2003 to nearly 500 in May 2004

Curious about this mythical scope, I placed my order two months after they first began shipping. I was anxious to see if Orion could really deliver a $429 “apo”. Despite rumors of long waiting lists, my OTA arrived in just three weeks.  My well-packed scope was shipped to my door via UPS in a small brown rectangular cardboard box.  Orion did all it could to hold down the bottom line.  There was no manual, but an instruction guide can be downloaded as a PDF document directly from Orion’s website. Of course, Orion included – as they do with all their scope sales – The Sky Student Edition CD.

The 80 ED is 23 inches long with dew shield mounted, focuser racked in and no diagonal attached. This makes it a little bigger than what one might have in mind for a grab-and-go refractor, but the 5.25” long aluminum dew shield is easily removable for separate storage. I liked the “mag wheel” style aluminum knobs. The Crayford focuser design is smoother than the typical rack-and-pinion focusers one sees on most cheap Chinese refractors, making it easier to achieve a “snappy” focus. The gunmetal grey tube color is fine, but it would have been nice if Orion had finished the OTA in a white powder coat. I did not like the cheap plastic lens cap which not only was too tight to sit properly, but actually left four gouge marks equally spaced around the outer edge of the dew shield. I recommend using the lens cap as a Frisbee instead.

As with most OTA-only purchases, this scope did not include mounting rings, finder, diagonal, or eyepiece. It does come with the typical Synta finder mounting bracket (which accepted my Orion 9×50 right angle diagonal only after I applied some force). It also sports a 1/4-20” machined aluminum mounting block for camera tripod attachment. The mounting block is inadequate to the task, however, and should be ignored.

If you’ve read Ed Ting’s excellent profile of this scope in the February 2004 Sky and Telescope, then you know his piece has probably done more to bring attention to this little budget apo than any Orion advertising. Without repeating Ting’s observations here, let me say that I agree with his overall high praise for the 80 ED. But he left out an important performance issue – quirky collimation. 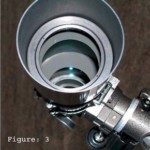 Some have compared the 80 ED with TeleVue’s stable of similarly sized semi-apo scopes, including the TV 85 and the TV 76. Having not tested them side-by-side, I cannot offer an opinion, but the optics seem pretty darn good.  According to Orion, the 80 ED’s doublet objective features one lens made from FPL-53 extra-low dispersion (ED) glass. I’ve read that it is not out of the question to actually craft a decent 80mm semi-apo with an f/7.5 ratio at the price Orion charges.  But something will have to be sacrificed. In this case, it is mechanics.

The biggest flaw in my 80 ED is the aforementioned shifting focuser coupled with the lack of ability to collimate the objective lens cell. The very solidly machined aluminum lens cell is superb. In fact, it is rock solid and oversized at 100mm for the 80mm (3.15”) objective (Figure 3). However, it has no provision for collimation – a critical omission and a key reason for the scope’s low price, no doubt.  Collimation must be done by shifting the focuser assembly at the rear of the optical tube – a task not terribly difficult, but not long-lasting either.

With the help of fellow NOVACer, Alex Lim, we have been able to achieve a collimation of my OTA which holds fairly well. However, it required the placement of shims (aluminum foil in this case) to hold the focuser in the proper position (Figure 4). Alex also used an Orion deluxe laser collimator to square the focuser assembly. 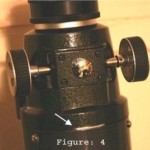 Fellow 80 ED owners have voiced complaints about the shifting focuser assembly and collimation issue, so I conclude it is very common to this scope. For me personally, it is a bit of an annoyance as I store my 80 ED OTA in a snug Stellarvue C5 padded case
(Figure 5). It is very easy to put pressure on the focuser end of the scope when removing the OTA and lose collimation. Since the 80 ED was designed as a travel instrument, this is not an insignificant issue.

Alex, who is more experienced with optics, helped me put my new toy through its paces. A few weeks after I loaned it to him for testing I called to see when I could fetch it back. He replied “What 80 ED?” I took that as a good sign.

Yes, Alex did reluctantly surrender it after I had the chance to compare views with his excellent Meade ETX90 (3.5” Maksutov-Cassegrain). In mid November, a near full Moon and Mars were available and we took advantage of decent seeing to judge the 80 ED’s optics. The Meade has slightly more aperture, but is limited by a central obstruction. Both scopes gave very similar color-free views of the Moon. If there was a color difference it might have been due to our eyepieces, but I did not see any. I did sense a slightly crisper and brighter edge to the 80 ED which is not unexpected due to its clear aperture. 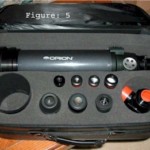 The 80 ED took a good bit of magnification.  Convention dictates that an 80mm diameter objective should perform its best up to 160x.  However, we saw very little drop-off in image quality at 200x (3mm Radian). Indeed, we pushed it to 240x (5mm-8mm Speers Waler at 5mm with 2x Ultima barlow) and the views were still sharp.

Mars was a modest 13.5 arc seconds in diameter by this time, yet its rusty color and tiny polar cap were distinct at 150x in the 80 ED. I also noticed some slight coloring around Mars (red on one side and blue on the other). I have also noticed this on Venus in subsequent testing. It might be a collimation and/or cool down issue, or it might be the scope’s optics.  Strangely, it does not appear in my lunar observations. This phenomenon causes me to wonder whether to classify this scope as an apo or “semi-apo”. I’ve not yet decided.

Alex performed a star test to assess the optics and photographed his results.  He noted that stars were sharp and he was able to easily split the Double-Double in Lyra. Using Vega and Deneb as his subjects, he observed that at 150x the in-focus images showed a round airy disk surrounded by moving, but concentric rings indicating good collimation. He noted only slight color on the two stars.  Out-of-focus images had sharp rings inside-focus and soft rings outside-focus and false colors were more obvious (see Figures 6 and 7).  We concluded that performance is rather good when the scope is collimated and allowed to cool. 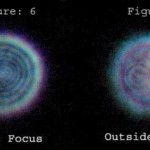 Some months later, I am still tweaking my 80 ED and hope to make use of its wider field of view (than my f/10 SCT) for some digital astrophotography. Members of the Orion_ED yahoo group have accomplished some impressive images of deep space objects with this little wonder.
I should note that I have mounted mine on an older Celestron CG-4 German equatorial mount with wooden legs. I swapped the factory-supplied 2” visual back for an aftermarket version (Mercury Systems) with a brass retaining ring. I purchased a William Optics 2” (97% reflectivity) mirror diagonal which is the perfect compliment to this scope in form and function. This diagonal was also favorably reviewed by S&T in February 2004.

So, is the Orion 80 ED worth the $429 (now $499) retail price? For my purposes, I would say yes.  It is a definite step up from the colorful Synta and other Chinese-made achromats which flood the market. And, for a good bit less than the cost of a top-of-the-line Nagler you can have a decent entry-level apo which gives you pleasing views of both planets and star fields.  Someone observed that the 80 ED is the best $429 you can spend in Astronomy today. If you already have a decent mount and accessories to go with the OTA, as I did, I would readily concur. I still wish Orion had painted it white, however.