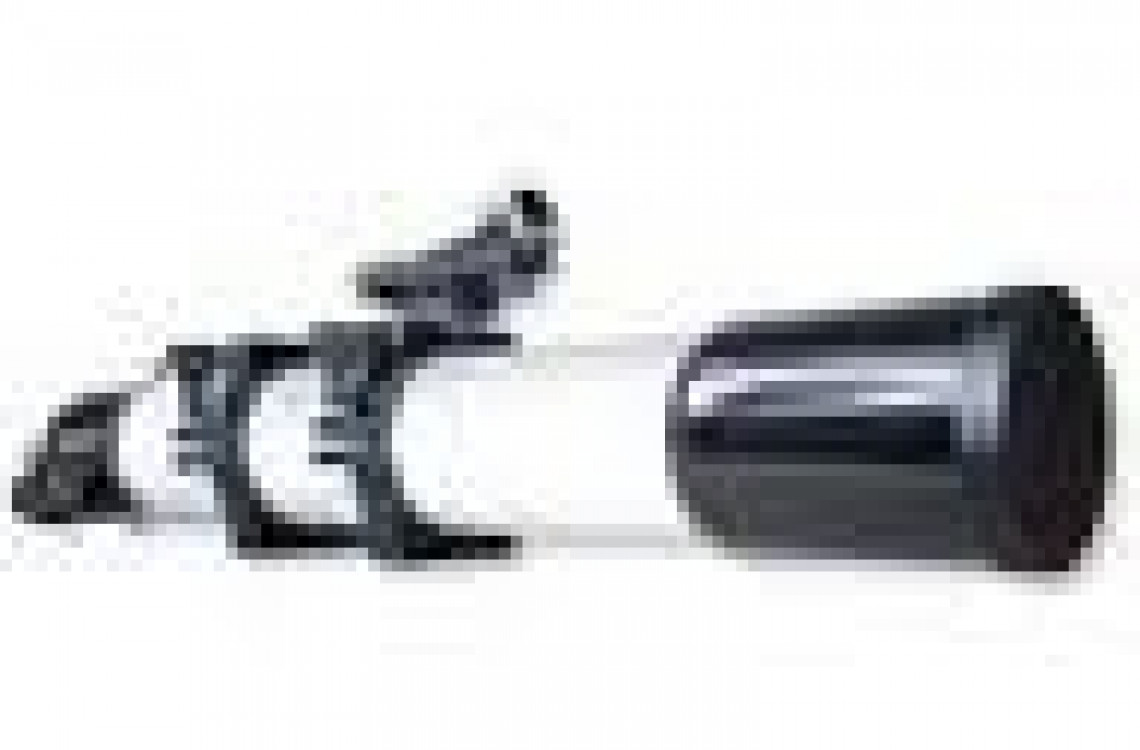 I own two achromatic Stellarvue telescopes, the 80/9D and the Nighthawk that I use for visual observation.   Both have 80mm diameter doublet objective lenses, with the former having a focal length of 750mm (f/9.4) and the latter 480mm (f/6).   I bought these telescopes as a complement to my first telescope, a Celestron 8 inch (f/5) reflector.   The Celestron is a respectable moderate-aperture telescope suitable for observing rather dim and diffuse deep-sky objects, especially at dark sky sites or when you have plenty of time for set-up/tear-down and to let the temperature of the optical tube assembly reach equilibrium with the surroundings to achieve decent views.   But when you don’t, you need something else… plus it wasn’t receiving a passing grade as a new piece of living room furniture.   So, I first bought the 80/9D to fill the… high-contrast-in-light-polluted-backyard-skies, easy-to-set-up, rapid-cool-down-time, no-collimation-required, lunar-and-planetary, leave-it-set-up-in-the-living-room-ready-to-use telescope niche.   And while the Nighthawk also shares many of these features, its smaller focal length also gives it extra wide field of views and provides even better grab-and-go transportability.

A short digression is warranted for the reader new to astronomy.   While the explanation of the optical design and performance distinctions between apochromatic and achromatic refractors is best left as an exercise for the reader, one additional important fact is that the former are usually far more expensive than the latter.   So for me the main issue was how to get the best value in purchasing an achromatic telescope, especially since I knew that another looming personal need was a quality mount and tripod… more on that later.   I spent several months studying internet user-group postings and independent reviews, supplemented by views through NOVAC club member telescopes and their shared experiences.   In the end, it became clear that while telescopes and mounts massed produced in the Far-East and marketed domestically by various distributors are getting better, their quality control, design, construction, and performance are still a bit of a gamble.   The all-too-often instances of owners having to tear apart an imported new telescope assembly to “fix” or “improve” it or having to engage in revolving-door purchase/sell cycles, and other similar stories of good money thrown after bad were experiences I wanted to avoid.   So I kept looking until I ran across the Stellarvue website, associated independent reviews, and loyal owners reminiscent of Apple Macintosh zealots.   The punch-line is this… with Stellarvue you pay a little bit more money for a well designed, solidly built, personally tested, achromatic telescope whose U.S. owner/manufacturer is accessible to the average consumer, works hard to achieve customer satisfaction, stands behind his product, and delivers what he promises.

Now onto the review.   The better of the two telescopes is the 80/9D, solely on the basis of optical performance at the eyepiece and largely because physics decrees that a longer focal length is inherently more forgiving with respect to the optical shortcomings of achromatic telescopes in bringing all wavelengths of visible light to the same focal point.   In practice, you have to look real hard to discern the classic blue and yellow fringing, usually most observable around bright objects like Vega, Venus, and a full Moon.   The concentric uniform Airy disk image diffraction patterns, both inside and outside of focus, reveal sound optics.   The rack and pinion focuser is large, smooth, and rugged, allowing for good control of fine focusing to achieve sharp images, even in the dead of winter with gloves on and numb fingers.   This focuser together with the proprietary coated optics, blackened interior, light baffles, solid metal construction, and rigorous quality control deliver consistent pin-point high-contrast images, and are ultimately what make this telescope special.   Additionally, I’ve found that in the light-polluted skies of my suburban Northern Virginia backyard and on nights of poor seeing, where majority of my observing is done, the additional aperture of my 8-inch reflector is of marginal benefit.   This is especially true for lunar and planetary detail (e.g., Saturn’s Cassini division and Jupiter’s dark bands) and in splitting double/multiple stars (e.g., Epsilon Lyrae), where the 80/9D takes 150-200x magnification very well.   On most nights, many open clusters (e.g., Double Cluster, M35, M36, M37, M38, and M44), globular clusters (e.g., M13 and M15), planetary nebula (e.g., M27 and M57), emission and reflection nebula (e.g., M42), and the brighter galaxies (e.g., M31, M110, M81, and M82) are not only detectable, but yield much detail with some patience, averted vision, and a good filter (narrow band or OIII).   Sharp high-contrast wider field-of-view images in a well made small aperture refractor can indeed be competitive with brighter images from larger aperture telescopes, for certain available celestial targets and atmospheric conditions.

One slight upgrade I’ve made to the 80/9D was to add nylon-tipped screws (sold by Stellarvue) to provide a more firm grasp of the diagonal by the visual back in the focuser draw tube.   This modification was driven by a few rather exciting instances of sudden unintentional diagonal rotation during some nights of significant temperature drop with some heavy 2” eyepieces and Barlow lenses installed.   I also shelled out some extra cash for a high quality 2” diagonal (Astrophysics with dielectric coating) and a set of good Plossl and Orthoscopic eyepieces (Antares) to further improve light transmission and other desirable optical qualities that directly affect visual observation.

I have spent several nights at NOVAC club sites comparing views with other types of telescopes (including my own 8” reflector, others of far larger aperture and differing design)… and this small aperture refractor held its own for sharpness, contrast, and field-of view, particularly on extended object like the Moon, Jupiter, and Saturn.   Additionally, fairly subtle details in certain deep sky objects (like the Ring Nebula, Andromeda, and globular clusters) can be discerned rather well at darker NOVAC sites.   It should also be noted that a refractor on an altitude-azimuth (alt-az) mount can’t be beat for its simplicity.   Typically, I’m up and observing in less than 5 minutes while some other folks struggle with awkward or heavy mounts, finicky “go-to” computers and electronics, collimation headaches, long cool-down times, and dead batteries.   When you’re observing at home with all its demands and distractions, the notion of a 5 minute versus 15 minute (or longer) set-up/tear-down time can make or break the decision to observe.   The 80/9D is my primary telescope for the Moon, planets, and Sun (with a suitable white-light filter), and is often placed on a motorized Celestron CG-5 mount connected to a wood (oak) tripod for stability and to maintain the desired subject in the field of view at higher powers.

At dark sky sites I typically use a (zero magnification) Stellarvue red-dot finder to locate objects in the sky with my refractors by star hopping.   At home my approach is to use a very stable Discmounts DM-6 alt-az mount on a wood (ash) tripod equipped with redundant computerized digital setting circles (Sky Commander) and a visible green laser pointer mounted as a finder.   I use the digital setting circles as an aid in figuring out how to locate new objects or when I want to find more objects within a period of limited observing time.   The laser pointer (used with great caution due to beam intensity) greatly simplifies the process of manually locating objects near the zenith where I do most of my observing at home in order to avoid trees, limit the effect of light pollution, and reduce atmospheric induced distortions.   Simply put, it’s far easier to stand and briefly point the laser into the sky than it is to kneel down, bend over, and look nearly straight up though the red-dot finder to view a crooked sky with a cocked head.   The red-dot finder is also prone to dewing up fairly rapidly in humid weather, and the thought of adding some jury-rigged mini-dew shield is just not something I’ve been too motivated to undertake given the stated alternatives.   All this said, the red-dot finder is a capable and inexpensive asset, is an especially valuable tool to learn the sky, and is a good replacement for poor quality finders possessing small poor quality objectives (30mm or less) that routinely come with certain imported telescopes.

Now, on to the Nighthawk… most of the above ascribed to the 80/9D also applies.   While slightly optically inferior to the 80/9D (e.g., for planets and the Moon given the shorter focal length), it has become my overall workhorse and is every bit as good mechanically as the 80/9D.   It is usually mounted on my Discmounts alt-az mount with digital setting circles and laser-finder, which not only provide rapid-fire observing capability during weeknights where observing time is necessarily short, but during NOVAC star parties where the public’s appetite for targets-observed-per-unit-time is large.   The Nighthawk on this alt-az mount is my current always-set-up-in-the-living-room-ready-to-use-on-a-moments-notice telescope.   If your observing situation includes extreme portability as a must or when traveling to a dark sky site is the result of a late snap decision, then its small focal length, aided by a sliding dew shield makes the Nighthawk an ideal choice as a “grab-and-go” telescope.   The short overall length also has another benefit in that if you tend to observe objects near the zenith you are not forced into very low awkward positions to view through the eyepiece at the very end of the telescope.   This additional convenience leads to more quality and comfortable observing time, and less time getting up and down from the cold soggy earth.   Stellarvue offers an airline friendly carrying case for the Nighthawk (and their other short tube telescopes) that has enough room left for eyepieces, a finder, diagonal, etc.   When used with a 2” diagonal and suitable long focal length 2” eyepieces, the Nighthawk can acquire astronomical objects best observed with more than a 4 degree field of view, a visual experience normally reserved for the domain of binoculars.   Flat undistorted wide fields of view are important for folks new to this hobby who often struggle to find their way to specific objects in the sky, for the not-so-new folks trying to star hop in light polluted skies to more subtle targets, and to better acquire some of the larger sky-gems (like the Pleiades) in a single field of view at the eyepiece.   In short (pardon the pun), the Nighthawk is a keeper.

The Stellarvue Yahoo newsgroup website (and its attendant zealots) often proclaim for the 80/9D, the Nighthawk, and the rest of their telescopes that… “Seeing is believing.”   So, I would close this review by extending to the reader an invitation to look and judge for him/her-self; and if you’re at a NOVAC sponsored event that I’m attending, stop by my set-up for a look, as I usually have one or both of these telescopes along for their views.