Last year my wife and I took a trip to Utah to visit several of the amazing National Parks in the Beehive State (fun fact – Utah’s state star cluster is, you guessed it, the beehive cluster). While hiking was the primary purpose of the trip, I knew the dark skies and desert scenery would make for some amazing views of the night sky. I was not disappointed. There is nothing quite like seeing the stars under a Bortle-2 sky (well, maybe a Bortle-1 sky).

Knowing that I would be hiking to many of the stargazing spots, I opted to bring along my Sony A7C mirrorless camera and Sony G 20mm f/1.8 lens. The compact, full-frame camera and ultrawide lens are the perfect combination for taking shots of the milky way in remote, hard-to-reach areas. I planned all of my photos ahead of time using Google Maps and The Photographer’s Ephemeris. Once at the locations, Stellarium and PhotoPills on my cell phone helped to dial things in. 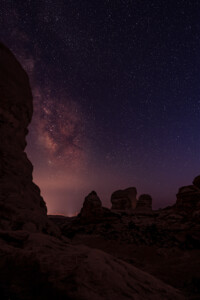 The Milky Way from Turret Arch.

The first stop was Arches National Park and a pre-dawn hike to the photo-favorite Delicate Arch. The trek to the arch in the dark made for treacherous goings (the trail markings were very hard to see), but cresting the mountain to see the sliver of a crescent moon above the landscape was the first indication that this trip would be on a different level. That evening, I posted up at Windows Arch for the sunset and stargazing. This site offered dual arches (The Windows Arches) plus another nearby arch (Turret Arch).

As the sunset, the first sign of the night sky showed through Turret Arch – Venus shining in the still blue sky. We ventured over to Turret Arch as the sky went dark and my first view of the Milky Way appeared. As I set up my camera to capture the sky, I met Jake, who was setting up his camera as well. He was new to astrophotography, so I took the NOVAC motto to heart and helped him with his setup. Like many people new to looking at the stars, he was more and more excited with every fun fact I told him. He ended up tagging along with us the rest of the night to learn as much as possible.

Next up were a few shots from the backside of the Windows Arches. The goal was to have the Milky Way cut across the arch, setting the center of the arch aglow with the bright core of our home galaxy. These were some of my favorite shots of the trip. I processed them by stacking several frames to reduce noise and then edited the foreground and sky separately. There were several iterations of these shots using different editing methods, but the bright orange glow contrasted with the void of the dark rift in this version caught my eye.

The next night, I wanted an unobstructed view of the Milky Way. We hiked out to Grandview Point Overlook in Canyonlands National Park to get a 270-degree view of the canyon and a horizon to horizon view of the sky. As the sunset, the number of hikers out at the overlook dwindled until it was just us and the beautiful sky above. I took many pictures of the sky but also took some time to just lie back, look up, and stare in awe at the beauty of our universe. 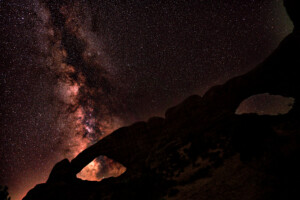 Looking through the Windows Arches.

Astronauts who have seen our precious globe from above talk about the spiritual transformation known as the overview effect. Seeing our planet not as streets and buildings but as the fragile blue marble it is provides not only a surreal connection to the world but also the strong desire to protect our fragile planet. A similar thing can happen when soaking in the night sky.

One of the most moving experiences I have had was watching the 2017 total solar eclipse. There is nothing quite like experiencing the beauty of orbital mechanics manifest as a darkening of the sun in the middle of the day. A close second, however, is staring up at the endless parade of stars on a silent vista in the middle of nowhere.

The pictures don’t do it justice. No description I can write will do it justice. Sometimes the universe just hits you in ways that are so personal that it feels like nothing else matters. I can’t recommend anything more than spending time looking up at the night sky. No telescope, no intentions, no searching for something special to resolve in your eyepiece. Because sometimes that something special is a feeling deep inside where you connect with the universe in a way that only a few have experienced. 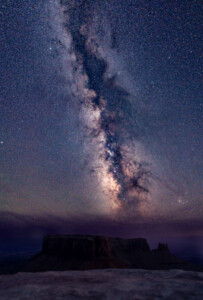