Two Vintage Optics Brought to Life in a New Century 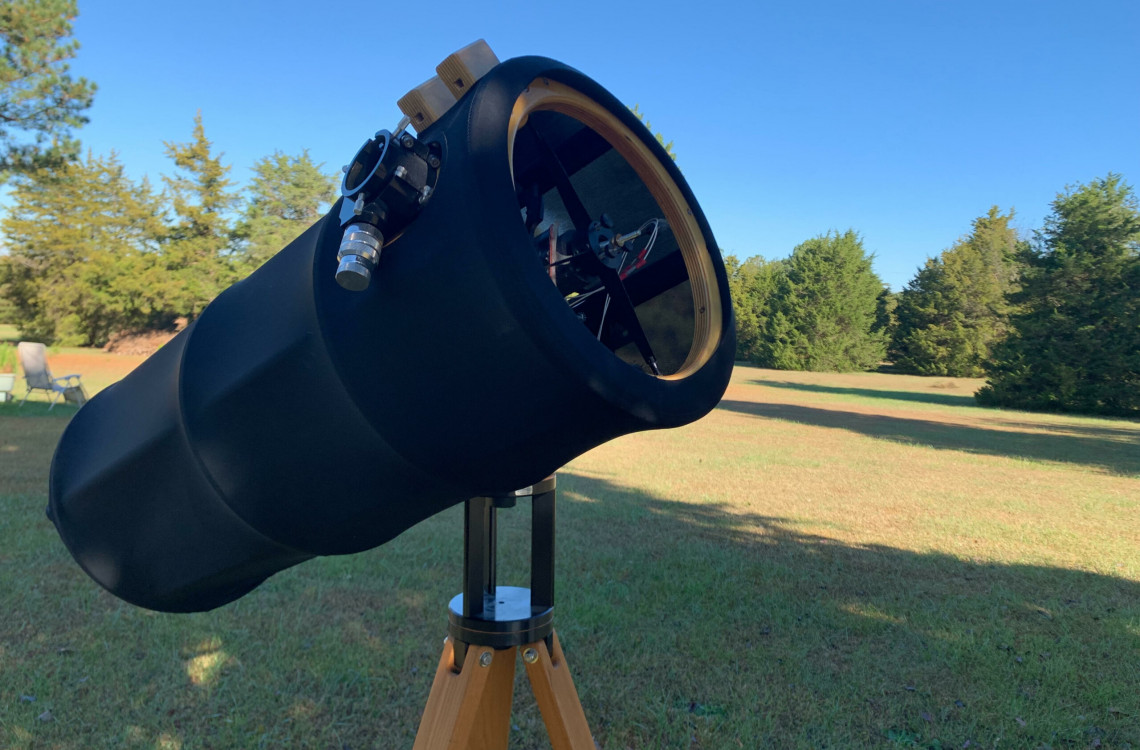 In late 2017 I found an 8″ f/4 Enterprise Optics primary for sale on Astromart. I had been wanting a small portable dob for a while. The size and focal ratio were “just right” But was it a good mirror?

A little internet searching revealed that Ed Beck worked at the famous Cave Optical for a time. That only increased my interest. I had never heard this optician or Enterprise Optics.

It arrived just in time for the local star party. I contacted a star party regular and ATM’er about Ed Beck/ Enterprise Optics. Whaddya know! He purchased an 8″ f/8 mirror in 1988, and raved about its performance.

He set up a Focault tester in one of the park buildings where the star party was held. I had no idea what I was looking at. He had a “bad” eight inch mirror for demonstration purposes. After a few minutes of viewing each, I was able to see a distinct difference. The Ed Beck was finished to high quality.

I sent the mirror to Dennis Steele of Dobstuff. Dennis rebuilds heavy underperforming dobs into lightweight winners with all the upgrades. There was on his site a picture of an equatorially mounted truss Newtonian. I asked for the same.

After a few short weeks the scope arrived. Wood OTA frame, aluminum round trusses, custom mirror cell and secondary holder, Moonlite focuser, and primary cover. I added a long 26″ ADM dovetail for mounting. The eyepiece is angled for optimal viewing with an altazimuth mount, in this case a heavy Discmounts DM6. The scope weights about 35 lbs. The DM6 is highly regarded for heavy loads like this. 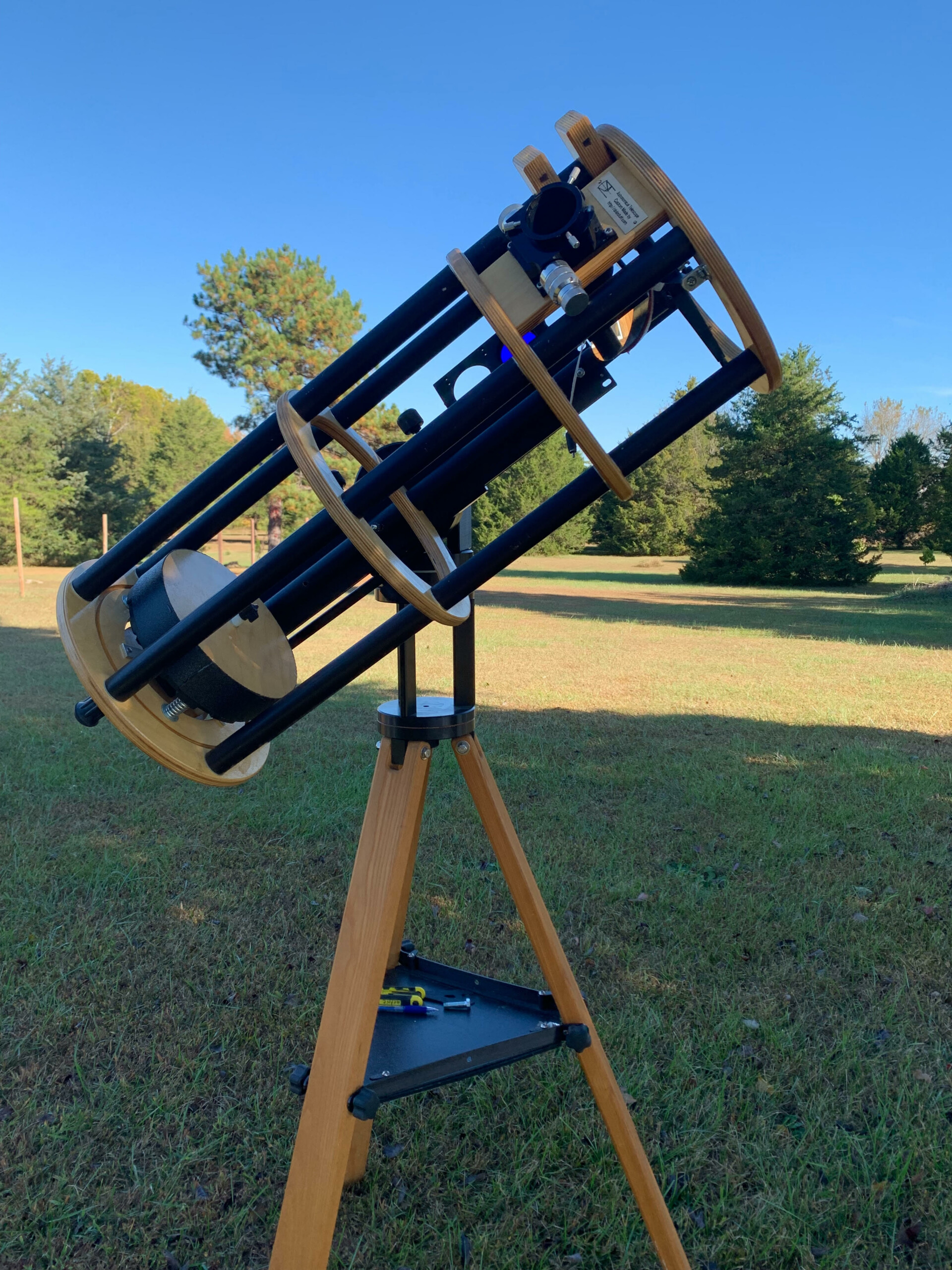 First light was a cold night under dark semirural skies. With a Paracorr and 21 Ethos, magnification is 45x with 2.2 degree field of view. Plenty to see Orion’s Sword region all at once. Thors Helmet Nebula (NGC 2359) was easily seen, and better with a UHC filter. A 4.5mm Delos giving 208x provided a good view of globular M79 in and planetary IC 418 in Lepus. This high magnification isn’t ideal with an alt-az mount, but I had no issues. No backlash and easy manual tracking. I was able to observe a number of DSO’s and double stars. 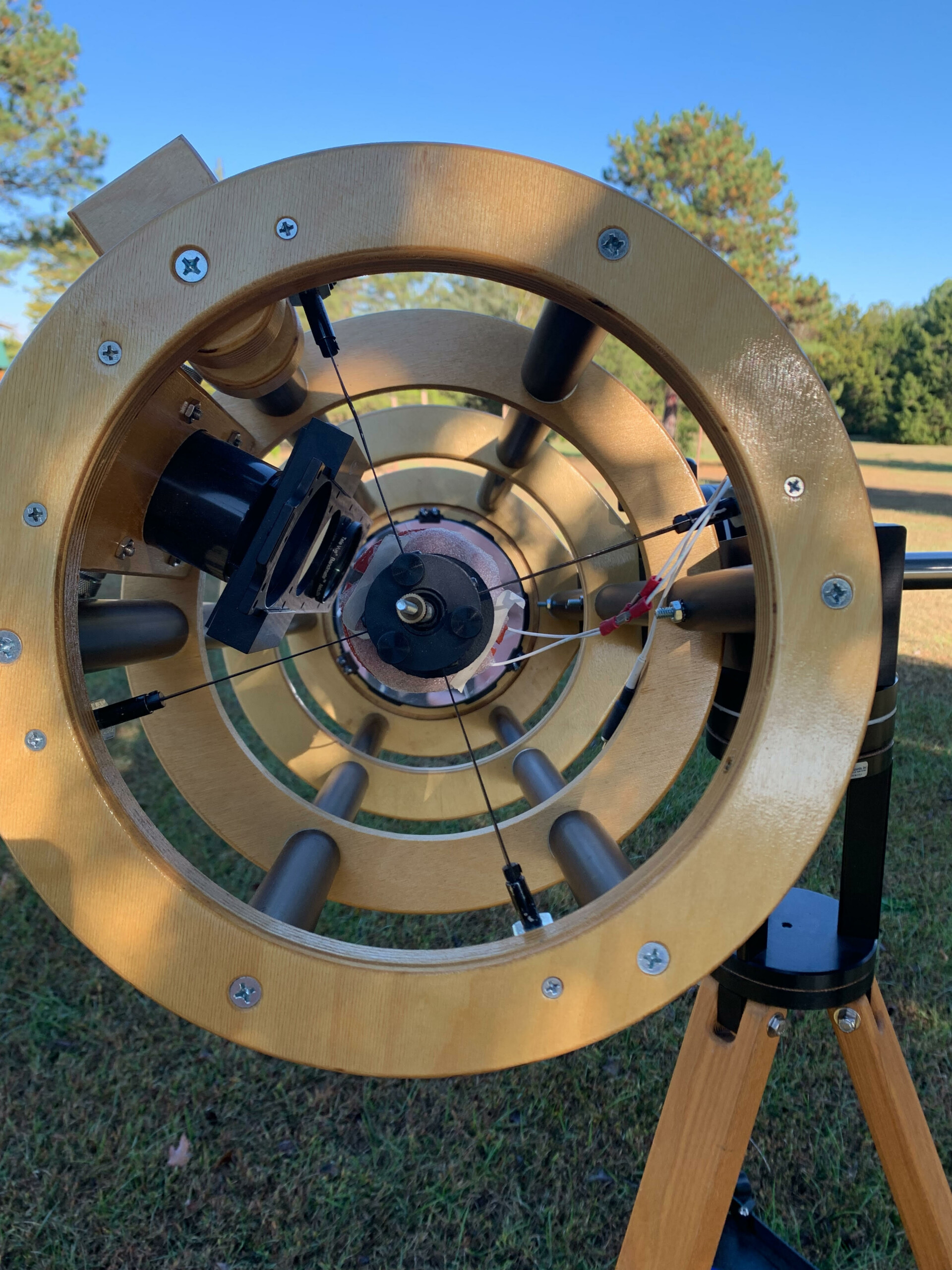 Later in the year I used a 3.5mm Pentax XW to view Jupiter at 267x. The image was bright and clear , only impeded by the typical Mid-Atlantic seeing. This scope is a winner at both low and high magnification.

Who was Ed Beck?
When did he operate Enterprise optics?
How many mirrors are out there?

A couple of years ago I obtained  a vintage  Jaegers 6″ f/5 lens.  A local lady found in her dad’s attic. Apparently he purchased it some time unknown and never made a scope for it. I’m not familiar with A. Jaegers products. Long before my time. In old Sky and Telescope magazines they had big ads every month. Looks like they sold just about everything a hobbyist could want.

It was up to me now. I had this relic from a generation ago (maybe even before I was born), I had no idea if it was any good or not. I had never seen a Jaegers scope in person. Never knew anyone that owned one. Sell this old unknown lens? Or keep it out of the purgatory of storage? When taking pictures of the lens in the daylight I noticed the bright symmetrical Newton’s rings. They sure caught my fancy. Did they relate to optical quality? Dunno. Its was too late, I was hooked.

Now what to do? I don’t have telescope making experience, skills, tools, or a workshop. Just another keyboard warrior in the 21st century. If this were a mirror there are several custom Dobsonian builders, any of whom can make a lovely scope. But refactors? The choices are limited.

After a  few emails to Parallax Instruments, I shipped the lens and focuser. That focuser is an antique 1980’s Astro-Physics single speed that I had laying around the house. I had replaced the focuser on a AP 5″ f/12 with the new fine-focus 2015 version, then sold that scope. A recipe for regret. Every time I think about it I hear Fred Sanford yelling “You big dummy!”

The Jaegers returned a month later housed in a sturdy aluminum tube, powder-coated gloss white. Joe does fantastic work. This is my second Parallax. The previous was an 8″ f/20 Dall-Kirkham. 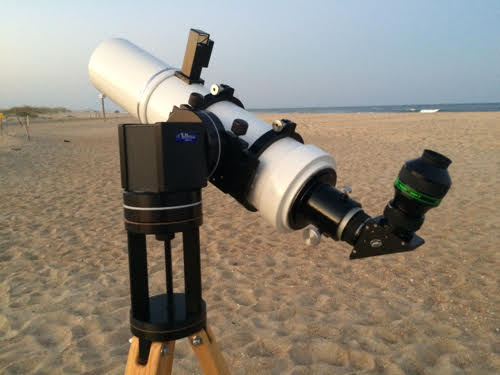 First light was February 28, 2016 at our club’s rural semi-dark sky site.  A clear, cold, and windy night with the excellent transparency and poor seeing typical of a passing cold front. The scope rode well on my trusty Discmounts DM4. A two-ich diagonal held a 21mm Ethos and 41mm Panoptic. The 21 gave 36x and 2.7 degree field of view. The 41 gave 18x and 3.5 degree FOV. The views- much better than expected!

First was the obligatory M42, within the entire Orion’s sword. Then the Double Cluster with Stock 2 at the edge of the field. The California Nebula was obvious with an Astronomik Hydrogen Beta filter. Switch to an Astronomik OIII, and the IC 405 and 410 nebulae in Auriga were bright and together in the field. Then the Rosette over in Monoceros. These large nebulae always escaped detection in the city, and I always considered them more photographic targets. To see them, to see them in their entirety, obvious in the eyepiece, left me in awe. The 41mm Panoptic gives an exit pupil of 8.2mm, for larger than any I’ve used successfully in a scope. It’s like magic on these large extended objects. My eye astigmatism affects exit pupils greater than 3mm, making stars spiky or cross shaped.  A TeleVue Dioptrx cleans that up nicely, making for round stars.

Next up was the southern Milky Way in Canis Major and Puppis. I don’t get to see this rich part of the sky too often.  I always try to make the most of any night when I have a good southern horizon. My three favorites are  bright nebula NGC 2467, and the unlikely open cluster pair NGC 2451 and 2477. Unlikely in that 2451 is bright, coarse and large, while 2477 is dimmer and looks more like a globular. I enjoyed comparing them together in the same FOV. A telescopic FOV, not handheld binoculars.

This scope isn’t an all around performer. At the low powers, there is some chromatic aberration visible around the brighter stars, generally those greater than 3nd magnitude. At higher mags, its becomes apparent around the fainter stars too. I tested the scope on Jupiter at 106x, the details were there, but the color fringing ruined the view.

The strength of this scope is low power views. Poor seeing? Laugh it off with magnifications under 50X. Later I added a 31mm Nagler for 25x and 3.3 degree FOV. This seems to work best. 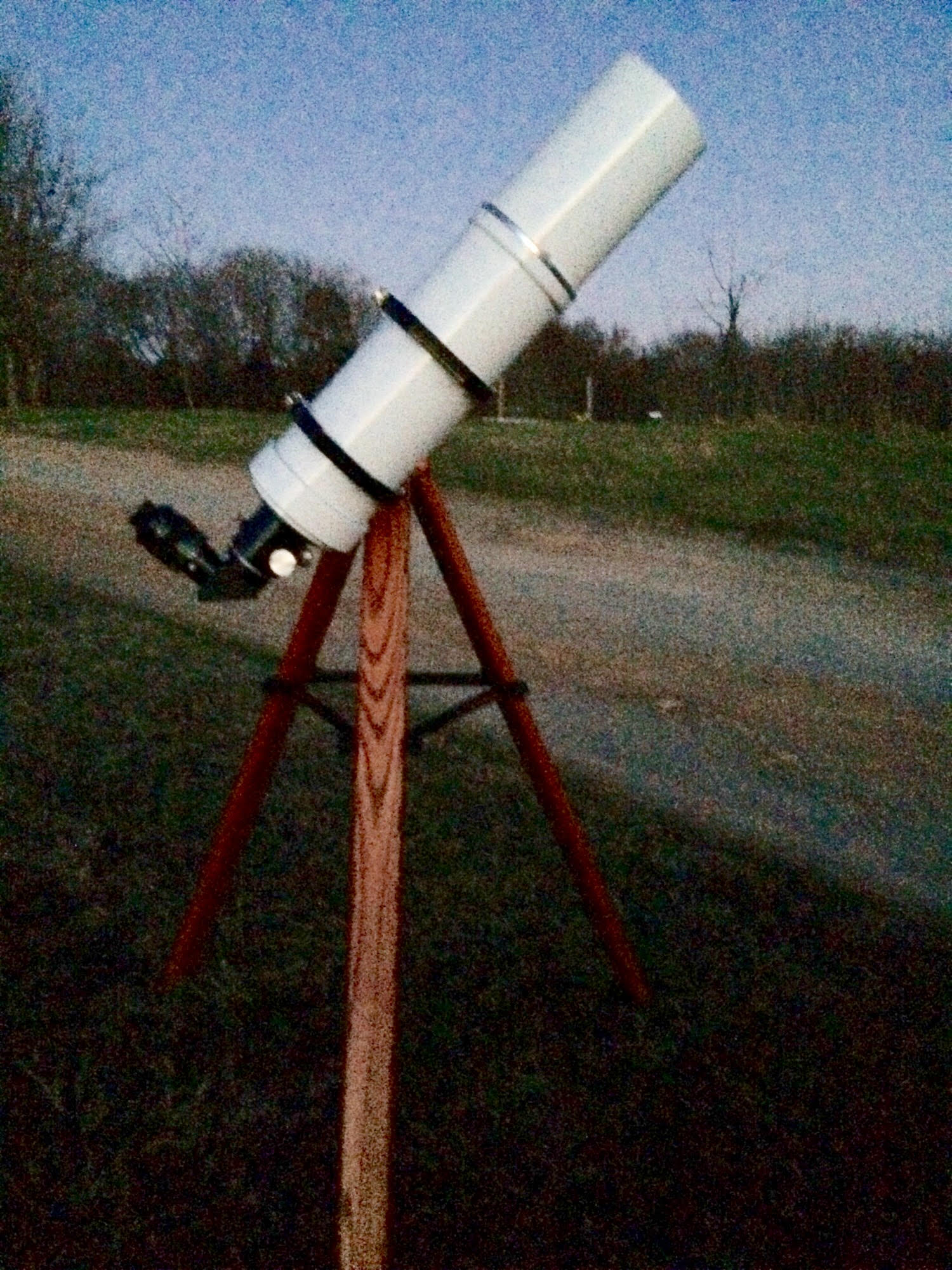 One thing that always put me off the widefield refactors is the reverse image caused by the diagonal. I’d rather have the  upside-down, reverse image in a Dobsonian than the simple left-right reverse. I found a full aperture Baader 2″ Amici prism diagonal. This accessory really brings wide field viewing to life. Observing for me is a correspondence between the naked eye view, the binocular view, the finderscope view, the star atlas view, and finally the telescope view. These are all correct image until I get to the telescope. Now, with an Amici prism, the correct image is maintained all the way down the chain.

This wide field works very well with the new  Interstellarum Star Atlas. Most of the objects plotted are within reach of the 6″ aperture. The chart scale makes easy work of star hopping.

When was this lens made?
Who made it?
How many were made?

I’m very lucky to have these telescopes. They are both classics and excellent observing instruments.